The best attractions for kids of all ages are available from Thursday, December 13 in the new children’s corner TIME OUT, which is located in the shopping centre OC Letňany. The opening of TIME OUT represents one of the final steps in the centre’s reconstruction and modernization, which has so far brought a number of new shops into the centre as well as new flavours and smells into the food court area.

Little kids as well as teenagers are guaranteed to have fun in TIME OUT. The new children’s corner covers more than 600 m2 and is one of the new attractions visitors can find in the shopping centre OC Letňany. TIME OUT was built by CBRE as part of a massive modernization of shopping centre OC Letňany, which has seen almost half of the centre reconstructed over the past couple of months.

The newly reconstructed central food court zone has been operational since the end of the summer holidays. It has doubled in size and now has a more diverse and healthy selection of eating choices. The new food court offers its visitors 350 seats in very comfortable surroundings with green vegetation and natural light. You can taste specialities from restaurants, which have opened up in August: Pizza Hut, Bageterie Boulevard, Regal Burger, Mex Dan, Bilbo Šmak, Thai Thai, Rio Sante, Guty and KFC.

Thanks to the reconstruction, almost 40 new shops and brands can now be found in the shopping centre OC Letňany. A number of traditional and popular stores have also undergone modernization – for example Deichmann, dm drogerie markt, KNIHY DOBROVSKÝ and others. In 2019, shoppers can look forward to shops of famous brands - Mohito, Sinsay, Cropp, Delmart or Pepco. Thanks to these new tenants, the shopping centre’s occupancy will rise to 99,5 %. 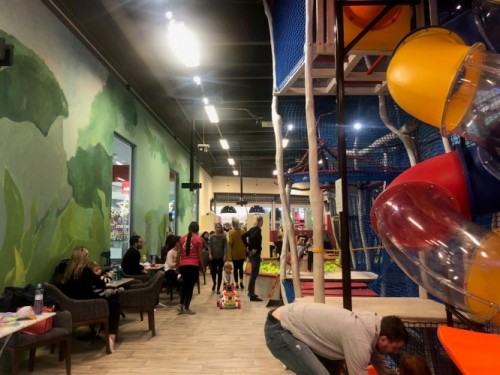